Before I set off for work I quickly check my phone as that anticipated time came around once more. 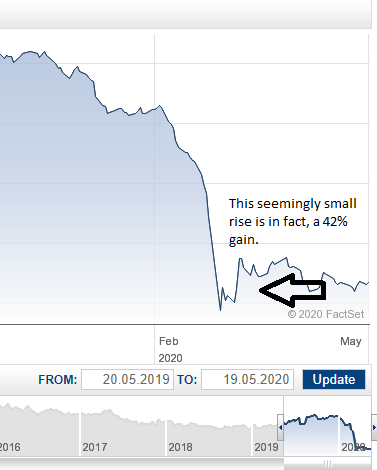 Only one thing came into my mind.

Stories like mine are pretty standard for the psychopathic day traders that make up the Wallstreetbets Subreddit.

Imagine a forum of people who revel in the masochism of posting their huge losses and gains made in the blink of an eye.

Where investors of all skills hang out and turn the dull world of Wall Street into a meme playground for self-deprecating degenerates.

That's r/Wallstreetbets in a nutshell, and it's a dangerously addictive place.

With hundreds of posts every day, people were hooked on watching traders achieve financial success or laughed as they threw their life savings away.

Then in mid-March as Coronavirus took hold in the western world, stock markets collapsed and billions were wiped off savings, portfolios, and pensions in a mere few days.

Bigger losses and frantic price jumps meant Wallstreetbets' membership saw huge growth as an increasingly baying audience rooted for gamblers who were trying to claw back money from the pandemic's economic impact. 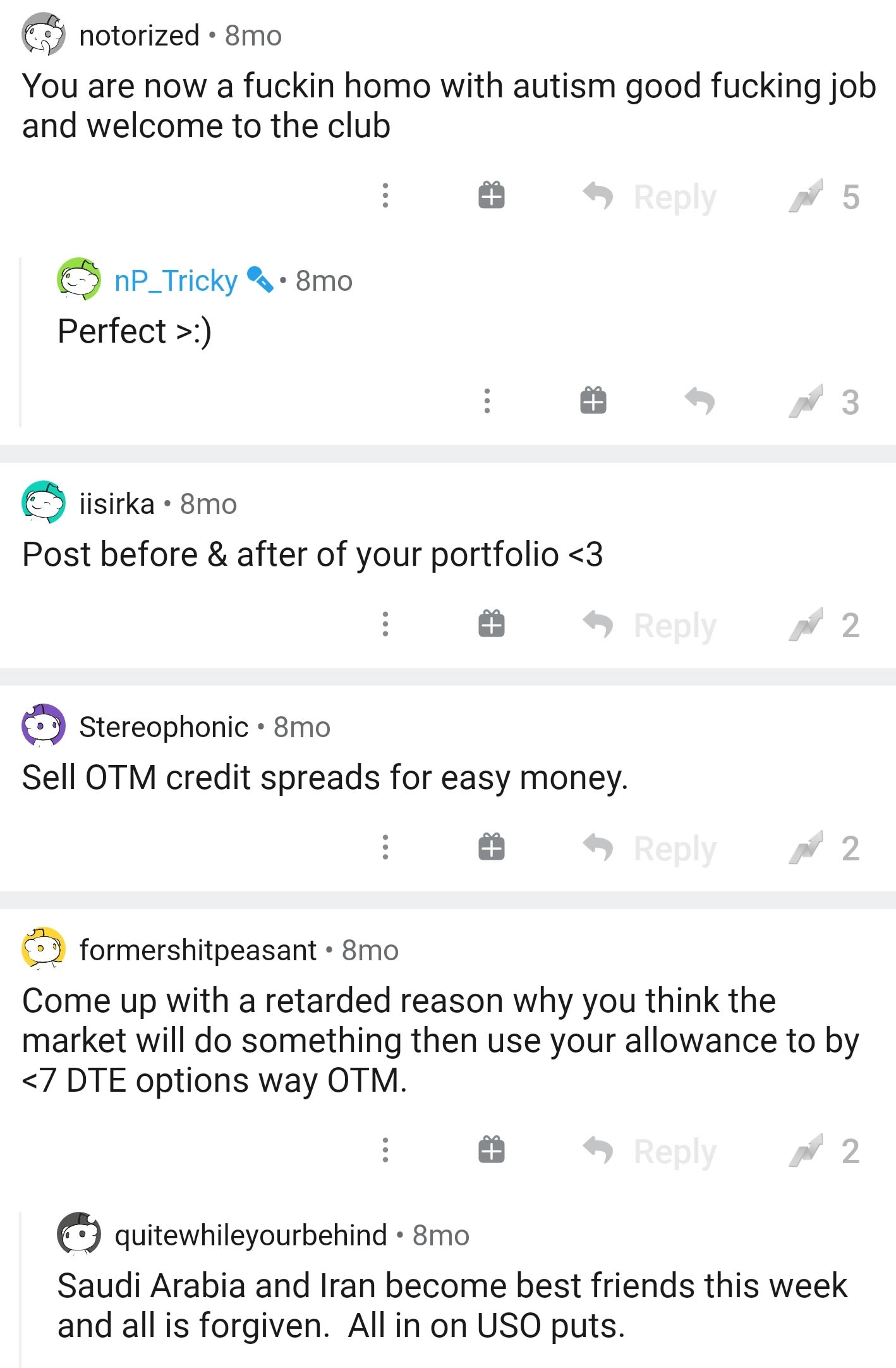 But profiteering from the market crash isn't like The Big Short — a true story of brokers who predicted the 2008 financial crisis.

Many can only dream of replicating the Wallstreetbets investors known as 'IKnowTheCodings' and 'WSBGod' who turned a less than $150,000 stake into a multi-million win.

Instead, the sad reality is you're going to be called an 'autist' by an inexperienced 18 year old who bet his first house deposit on a cocky hunch and is now much richer than you.

And in an attempt to follow woefully in their footsteps you'll find yourself losing all your money and think that you should've just opened a savings bank account.

Over the years, the community evolved to have its own weird customs like buying 'Chicken Tendies' being heralded as a benchmark of success or attempts to convince people of making obviously bad moves being followed by the slogan: "But it can't possibly go tits up!" 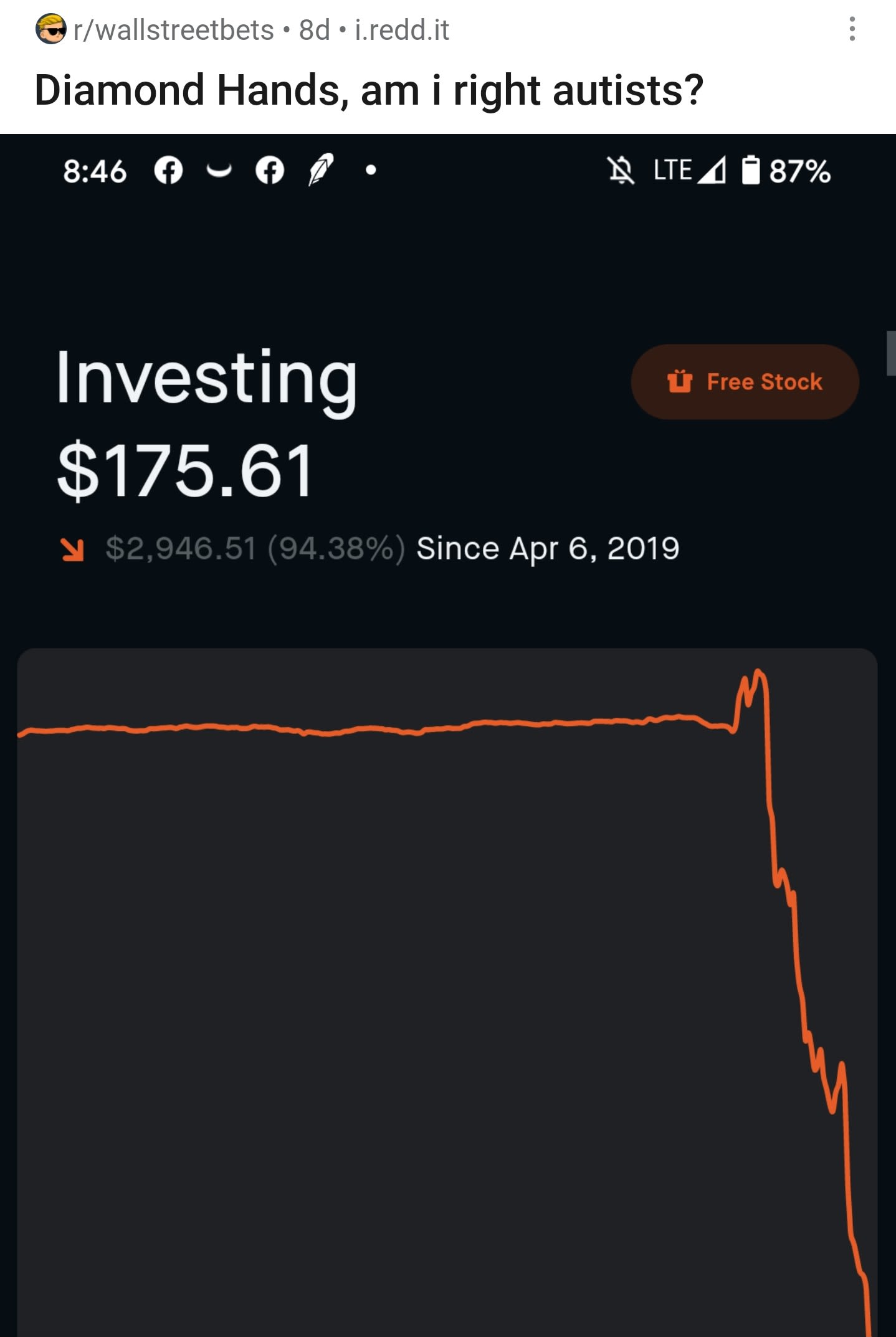 You’re also either a gay bear — someone who wants stock prices to fall — or bull gang, the opposite.

The group uses high-risk options trading with the majority backing 'puts' or 'calls' which bank on assets falling or rising in value over a period of time.

Other methods include 'shorting' where stocks are loaned and immediately sold in the hope of buying them back later cheaply and pocketing the difference. 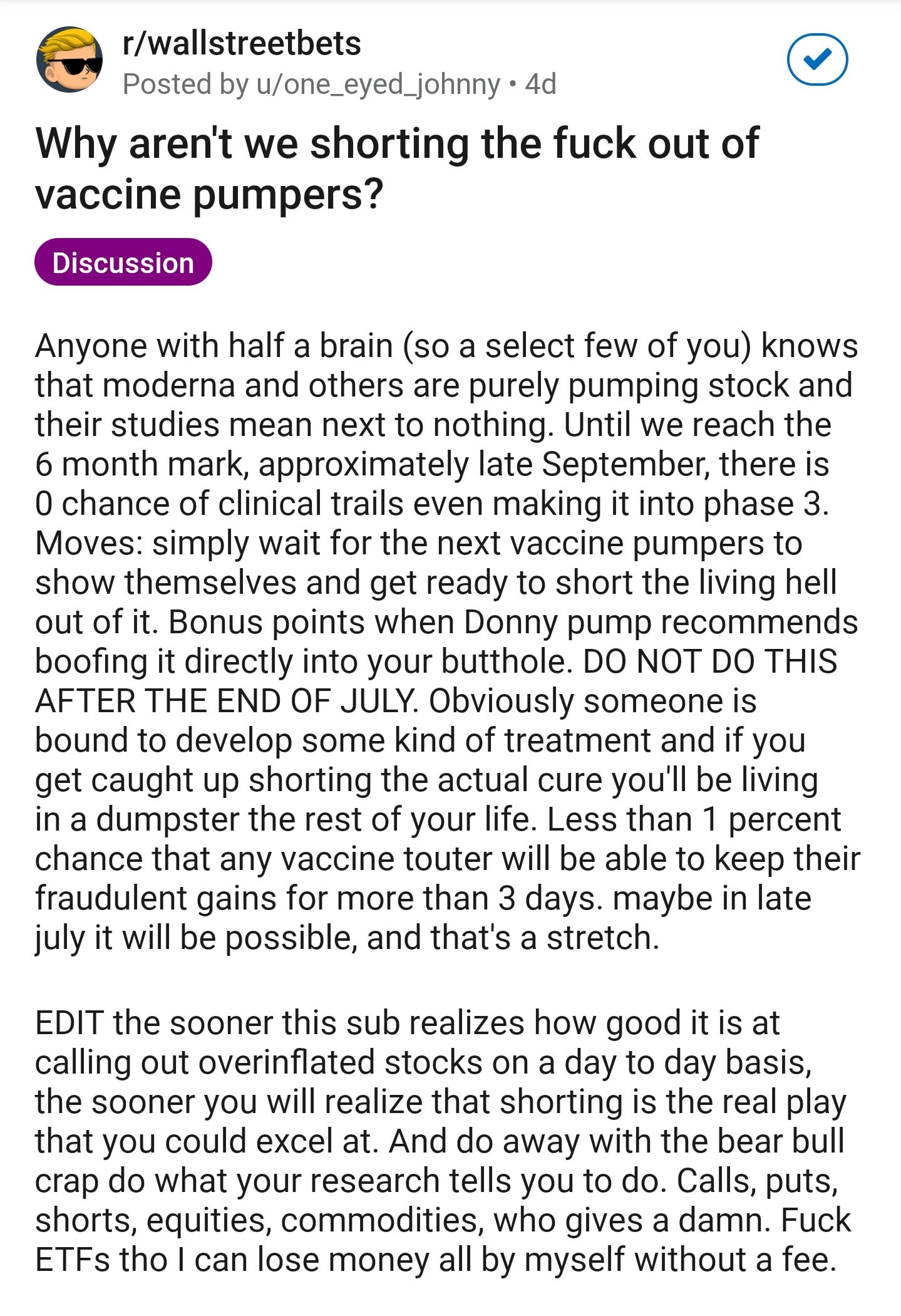 The volatility and unpredictability of stocks rising and falling by high percentages because of Coronavirus allowed traders to make serious money if they timed it right. 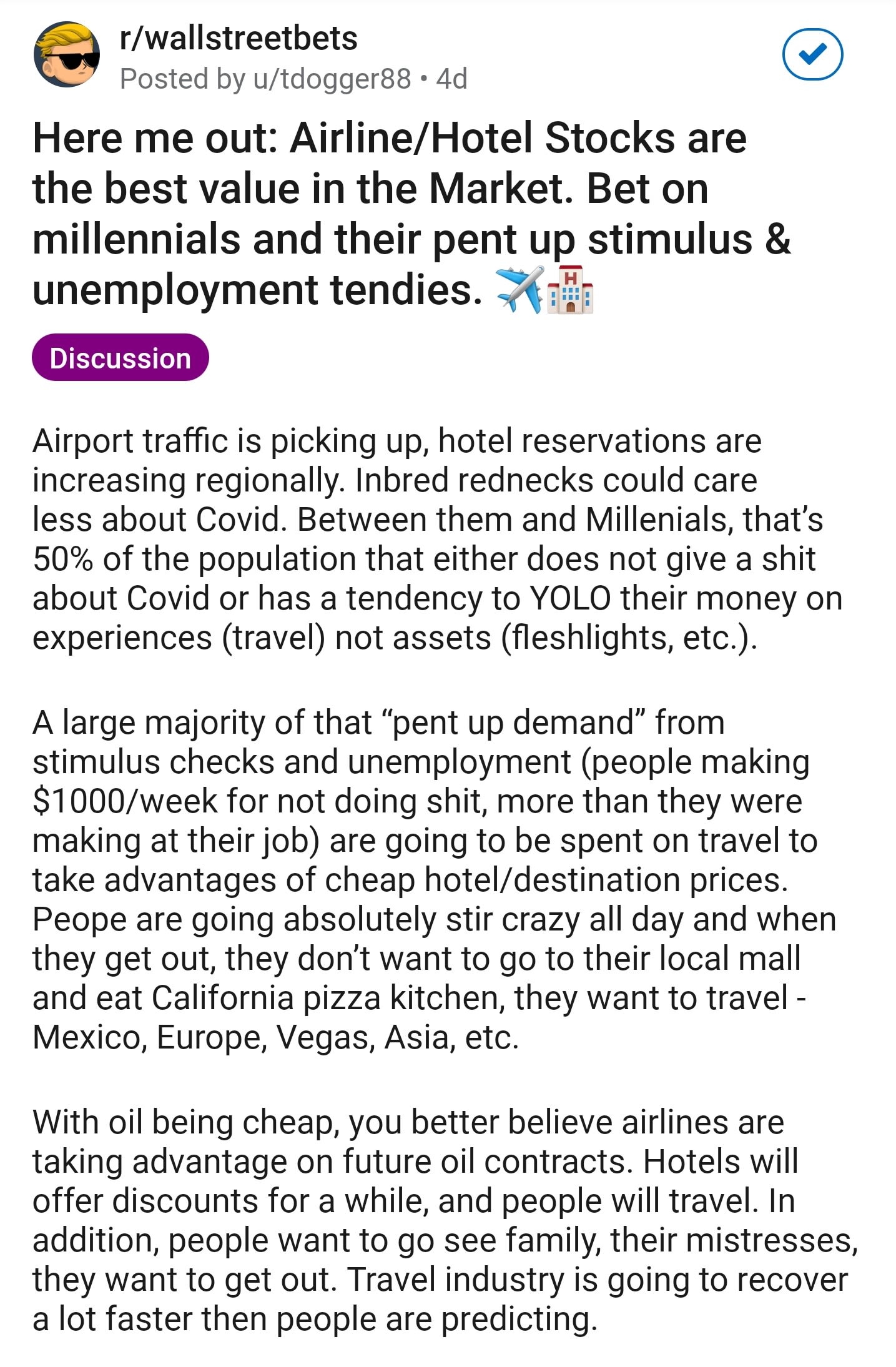 So as restrictions across the world eased and businesses returned to normal those who picked up dirt cheap stocks like these watched gleefully as their values increased dramatically or perhaps had already made a fortune shorting them.

Known as '4Chan with a Bloomberg terminal', Wallstreetbets effortlessly combines a generation who understands the cultural zeitgeist with unskilled and wet behind the ears naivety — leading to mixed trading results.

Ahead of Elon Musk’s second appearance on the Joe Rogan Podcast, members discussed shorting Tesla stock as a proactive response to his previous weed-smoking escapade which caused Tesla stock to fall around 10%.

Round 2 with the super genius! Elon Musk podcast drops tomorrow at 9am PST! Rejoice!! 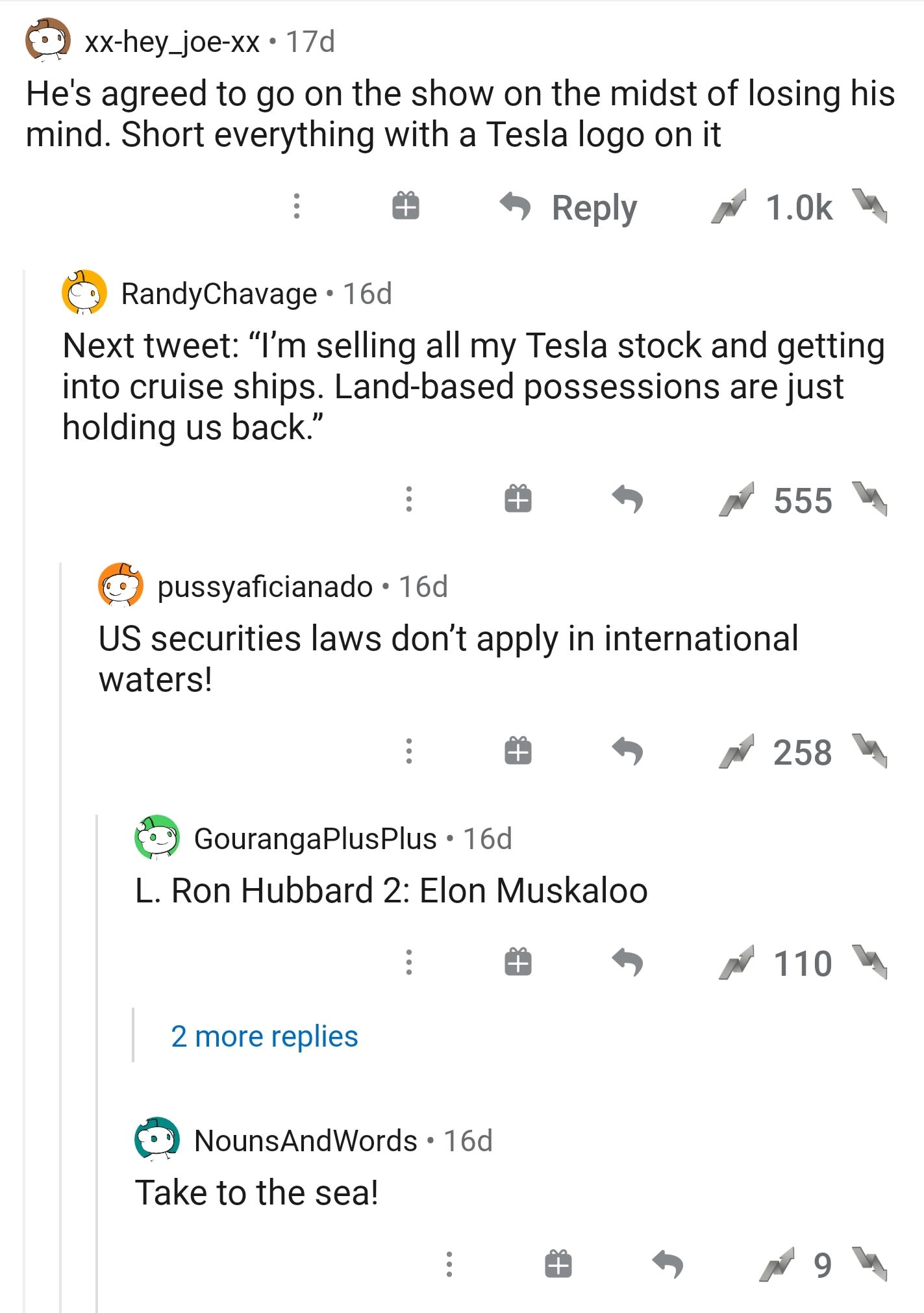 On the other hand, the group was seen to be one reason why Beijing telecommunication company, Zoom Technologies, saw their less than a penny share price soar 52,000% as confused traders bought in believing it was wrongly Zoom Video Communications - the company behind the popular video conference software.

The Subreddit is also no stranger to drama.

In 2019, a Wallstreetbets mod was accused of insider trading which allegedly opened a U.S. Securities and Exchange Commission investigation into the group.

Yet the fallout was nothing compared to the group going temporarily private at one million members.

WSB fanatics were kicked out and left wandering aimlessly through Reddit, setting up their own Wallstreetbets clones, and were desperately looking for their next Chicken Tendies hit.

Coronavirus has been the catalyst for Wallstreetbets’ numbers increasing and with its mix of memes, erraticism, drama, and a chance to earn thousands, it's now one of the most popular and engaged trading groups out there.

Despite people flocking in their droves the group is notoriously unforgiving towards overt newbies.

Many older members quickly call for rookies to be banned if they ask stupid questions or send videos of a man screaming at yellow paint as a response to interview requests, in my case.

But one member, a beer brewer, was kind enough to explain how he got started after posting a 7000% gain from a cannabis stock online.

He said: “I’d say most people that know me have no clue that I have 'tons' of money because I live a low cost and a non-extravagant life.

“I started with $5000 of boring investments for like two years then I lost it all being stupid with options.”

The brewer makes $40,000 dollars a year (£32,500) but like many other members he turned his salary into lucrative investments but also into dull losses.

He continued: “I did make a good amount from the coronavirus but not as much as I could have as I was focusing more on other things.”

Another user began trading when he was 14 through his parents’ stock account.

He posted a $2000 gain after backing Chinese entertainment platform BiliBili which published positive earnings thanks to increased mobile game revenue and daily users.

But as big gains encouraged new people to sign up and copy what they saw on the site many found themselves losing a lot of money.

One member joined WSB in mid-march and posted a $2000 loss when he backed the instant messaging platform, Slack to rise in value.

Later on, he posted a video showing another $10,000 loss after the stock price fell dramatically.

He said: “Just keeping it in perspective that it's not a life-changing amount of money and I'll have other opportunities in the future.

“It makes up 20% of my losses, probably won't play it again anytime soon.”

The trader also admitted that if he backed the stock market crashing there was a good chance he still would’ve lost it all as it crept back up.

He said: "I made bank on the market crash, I thought it was going to continue then lost it all.

"I should've just been more diversified but it's also like a tenth of what I have put into stocks so I was trying to play around and learn."

He said: "I lost money by consecutively buying puts and I kept going against my own fundamentals by not pulling out when it started to tank.

"I had saved up some money over the last few years and decided to do some gambling.

"As much as it makes me sick to see how much I lost, I never put in more than I could afford to lose so I'm still okay.

"But it's time to get back to smart trading and grow my last $200 in my portfolio though."

But the trader was still in good spirits and offered some advice.

He said: "I lost money from the high volatility, my roommate has made over a grand in the last few months just swing trading stocks.

"It's just like a casino, don't go in with more than you can lose.

"Look at your bank account, picture that money you are putting in just disappearing and actually think to yourself if you would be okay if it was just gone.

"And don't let yourself say 'oh if I put more in, I can win it back' that becomes a dangerous addiction.

"That's like sitting at a slot machine with an ATM next to you.

"It will end very badly."

Still, in bizarre community spirit — like drunk alcoholics arguing with one another at an AA meeting — gain and loss posts are quickly followed by hundreds of comments ripping into their decisions that act as a cathartic release for all involved.

He said: “Wallstreetbets’ gains and losses can be pretty normal.

"But that forum is basically the last place that a sane person should go to learn how to trade.

“The clue is in the name: if you think investing or trading is similar to betting, you’re setting yourself up for disaster.”

The analyst continued by saying options trading is never recommended for non-professionals and that winners on Wallstreetbets managed to successfully 'catch the knife' — meaning they picked stocks that showed no sign of rebounding but did.

Mr Stark also explained how trading was becoming easier for a wider audience.

He said: “15 or 20 years ago you would've been hard-pressed to find a broker that’d let you open an account with less than a grand or two.

“Now it’s usually possible to start trading with as little as a quid.

"But obviously, you’re not going to get very far with that amount.”

Wallstreetbets aren't the only ones witnessing changes however.

A Hargreaves spokesperson said: “Many of our new clients are relatively new to investing.”

Male clients increased by 10% with a significant number now using their mobiles to open their accounts.

They continued: “The ups and downs of the stock market is a normal part of investing and its important investors don’t rush to make decisions in haste that they regret later."

From Jan-April this year, their new clients nearly doubled to 94,000 when compared to 2019.

The broker also revealed that they saw an increase in shorting and puts trading.

DISCLAIMER: Futures, stocks and options trading involves substantial risk of loss and is not suitable for every investor, you should not engage in trading unless you fully understand the nature of the transactions you are entering into and the extent of your exposure to loss.